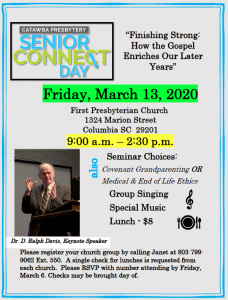 Please register your church group by calling Janet at 803-799- 9062 Ext. 550. A single check for lunches is requested from each church. Please RSVP with number attending by Friday, March 6. Checks may be brought day of. Click here to read the flyer.

Erskine Seminary has produced its first quarterly e-news digital magazine called Grace and Truth (link below). We are also producing podcasts regularly as tools for Ministers; these are messages to our Flock from Provost Dr. Michael Milton. 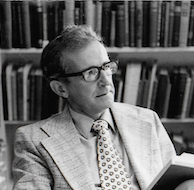 Kenneth was a graduate of Tucker High School, Erskine College and Seminary, Princeton Seminary and Union Theological Seminary.  He is a veteran of World War II, during which he served in the 10th Air Force as an aerial gunner in the China-Burma-India Theater of Operations.  Having completed the required number of combat hours and awaiting return to the United States, he suffered an injury to one of his arms.  Kenneth served for forty years in the ministry of the Christian gospel as a missionary in Pakistan, as a pastor of congregations in Georgia, South Carolina, North Carolina and Arkansas, and as a seminary teacher and author of New Testament study books.  He was blessed with a full and joyous life, a life highlighted with evidence of God’s gracious Providence.  He felt that his wife and family were a special blessing.  A memorial service will be held on February 6th at 1:00 p.m. at Madison Presbyterian Church.  In lieu of flowers, memorial donations may be made to The Caring Place, 1140 Monticello Rd. Ste. 400, Madison, GA 30650. 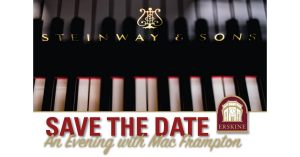 Erskine College welcomes internationally-known concert pianist Mac Frampton back to his alma mater, February 13th at 7:30 PM in Memorial Hall. Mac’s inimitable style has been described by critics as “Dynamite!” and “Colossal!” The Atlanta Journal-Constitution says, “Think of Horowitz mixed with Liberace and an ounce of Victor Borge, and you’ve got the picture.” Admission is free, but seating is limited. Make reservations via Facebook or by phone.

President and Mrs. Gustafson cordially invite members of the audience to a reception in Mac’s honor, immediately following the, Memorial Hall Atrium. 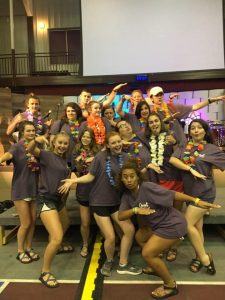 Christian Education Ministries is accepting applications for Work Crew 2020 for Horizon and Quest!

Apply today to join an amazing team working either one or both weeks of our denomination’s High School and Middle School conferences. Aid hundreds of students in worshiping their Lord and Savior and growing closer to Jesus by assisting the directors, speakers, leaders, and staff throughout the week.

Only 8-10 college aged students are chosen for Work Crew! There are 2 spots available to work the Quest week for 2 students who have finished their junior year of High School. So get your application in today! 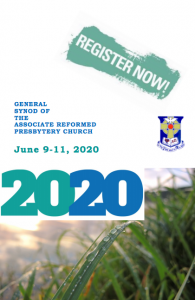 Click here to find out more about registering for Synod 2020!

We look forward to welcoming Synod back to Bonclarken in June! 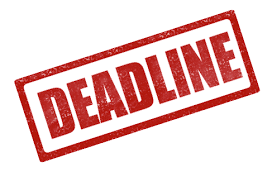 Statistical Reports are due February 1! Click here to download the forms. Synod’s agencies rely on an accurate denominational ministry fund allocation determined by pledges. Please do not leave any empty blanks on these forms. Thank you in advance for the effort you will expend on these reports.

Thank you for a strong finish for the year! 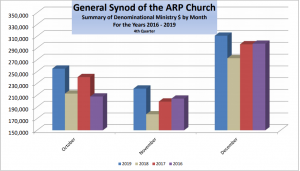 Here is the chart for the 2019 Denomination Ministry giving compared to the previous three years. The year finished over the projected budget by $45,000 with the December totals of $311,023. This is the first time our churches have given over $300k to DMF for a single month!  The 4th quarter had the highest monthly amounts than the prior three years.
More income allows more ministry activity for the Gospel and encourages all our agencies to move ahead. Check arpchurch.org for more information about the Denominational Ministry Fund. Thank you to our churches that supported the DMF in 2019. 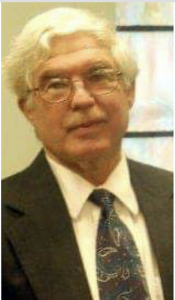 Funeral services were held Monday, January 13, 2020 at 1:00 pm at the Hickman-Strunk Funeral Home with Bro. Hilton Duncan and Bro. Larry Brown officiating. Burial was in the Angel Cemetery.

He was born October 22, 1938 in Milo, Maine to Everett Stanchfield and Marion Noyes Stanchfield. Wayne served in the United States Air Force for thirteen years and attained the rank of Captain. He had a thirst for knowledge and was well educated, having attended the Missionary Baptist Seminary in Jacksonville, Texas where received a Master in Theology. Wayne also earned a Doctorate in Ministry from Concordia Lutheran University in St. Louis and taught himself Greek and Hebrew. He was ordained July 13, 1975 and was serving as pastor of Midlane Park Associate Reformed Presbyterian Church when he retired. He had served on the Board of Directors of the ARP Foundation for three years and on the Executive Board of Synod for two years and as Moderator of the Mississippi Valley Presbytery. Since his retirement and moving back to the area, Wayne and Brenda attended Stearns First Baptist Church. In his spare time, he enjoyed playing chess, travelling, and people in general.

Preceding him in death were his parents and a sister, Nancy Reynolds.

Hickman-Strunk Funeral Home was honored to serve the family of Rev. Wayne Stanchfield. 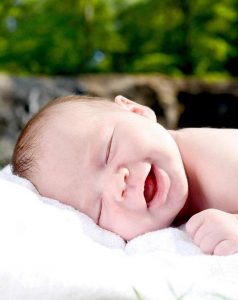 This Sunday, January 19, is Sanctity of Human Life Sunday.

“Before I formed you in the womb I knew you, and before you were born I consecrated you; I appointed you a prophet to the nations” (Jeremiah 1:5).

The ARP Center will be closed Monday, January 20. 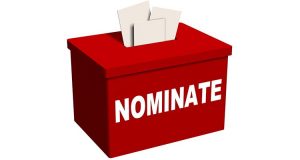 Please prayerfully consider nominating someone for a spot on an ARP board or committee. The list of vacancies can be found here. 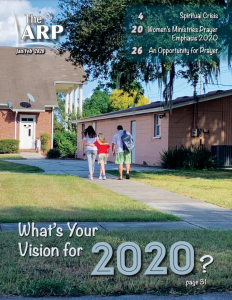 Click here to read the latest ARP Magazine.
Happy New Year. What is your vision for 2020? Read about the ARP Magazine vision and goals on page 31. The Moderator’s Challenge is on page 4 followed by the Synod Emphasis article, “Revival”, on page 6. The Women’s Ministries Prayer emphasis by Emily Woodard is on page 20. Dr. Derek Thomas was invited to pray at the House of Representatives. His prayer is on page 27.
If you would like a complimentary print copy of this issue, please send me an email or call our office 864-232-8441. 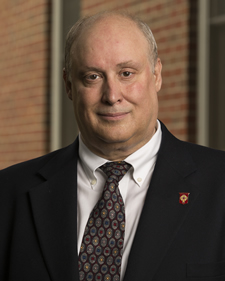 [Due West, SC, 12/30/2019–] Dr. Terry Eves, Professor of Old Testament and Biblical Hebrew at Erskine Theological Seminary, went home to the Lord on December 30, 2019. Dr. Eves is survived by his wife, Dianne of 43 years, and sons Eric (Beth) and Kevin (Erin) and grandchildren Levi and Andrew; mother Marylouise Eves, and brothers Steve (Waneda) and Bryan (Sheila).

Dr. Eves is preceded in death by his father, Donald Eves.

Dr. Eves had a remarkable record of scholarly study and service that included his Ph.D. in the Hebrew Bible from The Annenberg Research Institute, along with additional graduate work at the University of Pennsylvania in Textual Criticism with Dr. Emmanuel Tov of the Hebrew University, and Westminster Theological Seminary in Ugaritic with Tremper Longman III.

He obtained a Master of Arts in Hebrew Bible from the Dropsie College of Hebrew and Cognate Languages, a Master in Theology in Old Testament at Westminster Theological Seminary, a M.A.R. in Biblical Studies from Westminster Theological Seminary, and a Bachelor of Arts in Biblical Studies with New Testament emphasis from Grace College.

Dr. Eves was a careful scholar and teacher who brought over 30 years of experience in the church and classroom to Erskine. He began his teaching with the Erskine family at Erskine College where he was a Professor of Biblical Studies from 2000 – 2007. He later came to Erskine Theological Seminary beginning as an Adjunct Professor of Hebrew and Biblical Theology in 2005 where he was known for mentoring students both in and out of the classroom. His desire that the faculty worship together led him to serve as Dean of the Chapel of the Seminary and he also served as chair of the Graduate Committee. He was an elder in the Presbyterian Church in America.

Dr. Michael A. Milton, Provost of Erskine Seminary, reflected on Dr. Eves’ passing: “Our friend, Terry, was not only a prodigious Bible scholar, but he was also one of the most pastoral professors that I have ever known. I will always remember Terry welcoming me to the Erskine family by remarking, with that unforgettable soft and tender tonality we will all miss, ‘Mike, I found a home here at Erskine. I know it will be a home for you, as well.” Because of Dr. Terry Eves, who set an unsurpassed pastoral example, with a heart beating for Christ Jesus, and for students, he not only made Erskine my home but a home for many others. He leaves a living legacy that proclaims, “The heart of theology should always be expressed in the love of Christ Jesus.'”

Dr. Rob Gustafson, President of Erskine College and Theological Seminary, remembered Dr. Eves this way, “I knew Dr. Eves not only as a member of the Erskine Theological Seminary faculty, but also as a kind and helpful professor when I was working on my Doctor of Ministry degree at Erskine Seminary. As a student, I appreciated Terry’s deep love for the Scriptures and his clear conviction that the entire Biblical account points to Christ. This perspective challenged me to read the Old Testament with a new and rich perspective. He was always encouraging to others, always available to me as a student, and always expressive of his deep love for Christ. Dr. Eves will be greatly missed. Heaven has gained a faithful servant, but we have lost a faithful professor of the Old Testament and a beloved friend.”

Dr. Eves’ memorial service of thanksgiving and worship to Jesus Christ will be in the chapel of Bowie Divinity Hall at Erskine Theological Seminary in Due West, SC at 11:00 am on Saturday, January 4, 2020.

Erskine Theological Seminary prepares men and women to fulfill the Great Commission of Jesus Christ. Dr. Terry Eves will remain an exemplar of how Erskine Seminary seeks to live this mission with fidelity to our Lord and Savior, Jesus Christ; His inerrant and infallible Word, the Holy Bible; and by teaching the Doctrines of Grace according to the Westminster Confession of Faith—all knit together with Christ’s love lived out in grateful hearts.

Dr. Terry Eves, Erskine Theological Seminary Professor of Old Testament, passed away unexpectedly on Monday, December 30. Please pray for his wife Diane and family at this time. Details on services will be posted as soon as they are available.