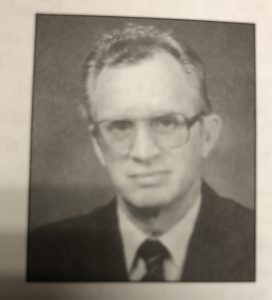 David was born April 10, 1934 in Rangeley, Maine, the son of Ardine G. and Mattie Robbins Ellis. In addition to his parents, he was preceded in death by his wife, Judith Spofford Ellis in 1998 and by a sister, Diane Ellis Ward in 2017.

David served in the United States Marine Corps in the 1950s.  He was a graduate of Farmington State College in Farmington, ME. He was a teacher and principal in Maine and Florida until 1977 when he entered Erskine Theological Seminary in South Carolina.  Upon graduation Reverend Ellis pastored Johnson’s Creek ARP Church in Covington, VA, Bethlehem ARP in Due West, SC and retired from Garrison Memorial ARP Church in Bessemer City, NC. He served as the Moderator of the Virginia Presbytery as well as the Chairman of the Virginia Presbytery’s ecclesiastical commission. David was a member of the Lions Club where he was the Lion of the Year in 1998 and 1999, a former chaplain at Alleghany Regional Hospital, and president of the Habitat for Humanity in Bessemer City, NC. In his younger days he was a volunteer firefighter. David enjoyed reading western books and was an avid baseball fan.

In keeping with his wishes, his body has been cremated. His ashes will be buried alongside Judith in Bessemer City, NC in the spring.